Slide bar to see more artwork. Click on any image to enlarge. 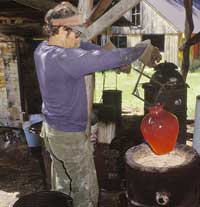 The Japanese word “Raku” is loosely translated [by me] to indicate a hopeful expectation of an unknown and delightful outcome from my humble exertions. Surprises do come, though not always delightful.

When the name Raku is used to describe pottery, people usually associate it with copper luster glazes. Strictly speaking, traditional Raku glaze had no color in it. It was a clear, crackled glaze used over different colored clays which rendered whatever color the clay was to the glaze. A black glaze was made by smoking the pot in a sagger. The smoke was trapped in the glaze to blacken it.

Copper, silver, gold and bismuth were used by the Egyptians and the Persians in the 12th and 13th centuries to create various luster effects by smoking the glaze in the oven at the end of the firing. These techniques traveled no further east than the Indian subcontinent.

The melding of these two methods was completed in the late 1960s, credit generally given to Paul Soldner. Anything involving removal from a hot kiln and application of post firing combustibles is currently accepted as Raku technique by everyone other than Raku fundamentalists. I employ straw, pine cones, moose dung and pine shavings to develop the various glaze effects you will find on these pots.